Leukotrienes are lipid mediators that evoke primarily proinflammatory responses by activating receptors present on virtually all cells. The production of leukotrienes is tightly regulated, and expression of 5-lipoxygenase, the enzyme required for the first step in leukotriene synthesis, is generally restricted to leukocytes. Arachidonic acid released from the cell membrane of activated leukocytes is rapidly converted to LTA4 by 5-lipoxygenase. LTA4 is further metabolized to either LTC4 or LTB4 by the enzyme LTC4 synthase or LTA4 hydrolase, respectively. Unlike 5-lipoxygenase, these enzymes are expressed in most tissues. This observation previously has led to the suggestion that LTA4 produced by leukocytes may, in some cases, be delivered to other cell types before being converted into LTC4 or LTB4. While in vitro studies indicate that this process, termed transcellular biosynthesis, can lead to the production of leukotrienes, it has not been possible to determine the significance of this pathway in vivo. Using a series of bone marrow chimeras generated from 5-lipoxygenase– and LTA4 hydrolase–deficient mice, we show here that transcellular biosynthesis contributes to the production of leukotrienes in vivo and that leukotrienes produced by this pathway are sufficient to contribute significantly to the physiological changes that characterize an ongoing inflammatory response. 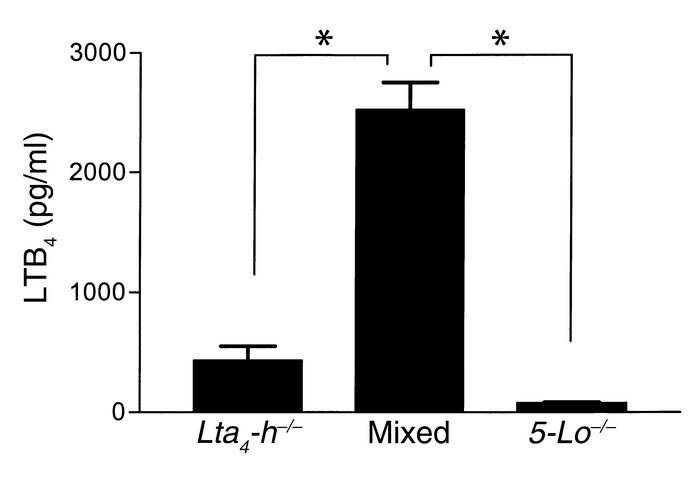 In vitro LTB4 production by leukocytes stimulated with A23187. Leukocytes were isolated from peritoneal lavage fluid of mice in which acute peritonitis had been induced by injection of zymosan A. The and leukocytes do not produce significant amounts of LTB4 in response to stimulation with A23187. In contrast, similar treatment of a mixture of these two cell populations resulted in a significant increase in LTB4 production. This graph shows data averaged from three separate experiments. * < 0.01.