Mutations in the dysferlin gene underlie a group of autosomal recessive muscle-wasting disorders denoted as dysferlinopathies. Dysferlin has been shown to play roles in muscle membrane repair and muscle regeneration, both of which require vesicle-membrane fusion. However, the mechanism by which muscle becomes dystrophic in these disorders remains poorly understood. Although muscle inflammation is widely recognized in dysferlinopathy and dysferlin is expressed in immune cells, the contribution of the immune system to the pathology of dysferlinopathy remains to be fully explored. Here, we show that the complement system plays an important role in muscle pathology in dysferlinopathy. Dysferlin deficiency led to increased expression of complement factors in muscle, while muscle-specific transgenic expression of dysferlin normalized the expression of complement factors and eliminated the dystrophic phenotype present in dysferlin-null mice. Furthermore, genetic disruption of the central component (C3) of the complement system ameliorated muscle pathology in dysferlin-deficient mice but had no significant beneficial effect in a genetically distinct model of muscular dystrophy, mdx mice. These results demonstrate that complement-mediated muscle injury is central to the pathogenesis of dysferlinopathy and suggest that targeting the complement system might serve as a therapeutic approach for this disease.

Contractile properties of the -deficient EDL muscles and muscle pathophysiology in response to LCs in vivo. 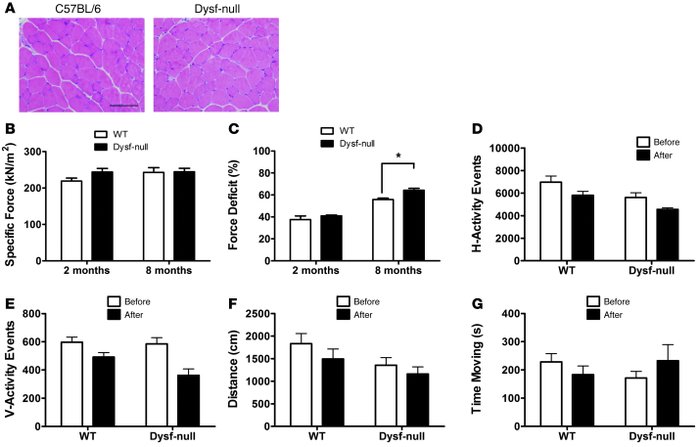